Meet Wendy, a 43 year old stay at home mom from rural Wisconsin. She’s been married for 22 years, and she has three children: Dani – 23, Riley Kate – 17, and Evan – 7. She enjoys baking, reading, rubber stamping/card making and most anything crafty.

She reached and exceeded her weight loss goal by losing 120 pounds over the past 10 months! 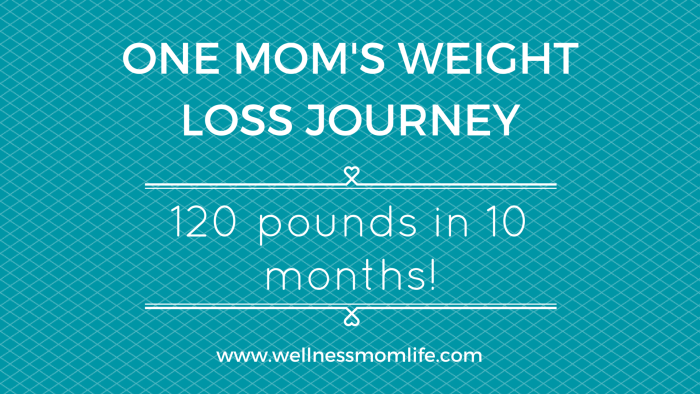 I’ve known Wendy via facebook over the past several years, and I was so impressed with seeing her weight loss journey that I just wanted to share it with you all. She was gracious enough to say yes. I’m so excited for you to hear her story.

What made you decide to go on this weight loss journey?

I felt old. Every part of my body hurt. At nearly 300 pounds, it took effort just to move. My joints ached. It hurt to stand, it hurt to sit, it hurt to bend over. I was watching my life pass me by and I was too tired and overweight to participate in it. I was embarrassed of my body and how badly I had let myself go. It was taking a toll on my family and my marriage. I started isolating myself and depression had set in.

[bctt tweet= “I was watching my life pass me by and I was too tired and overweight to participate in it.”]

Honestly, though, the biggest factor was my 7 year old son, Evan. He was diagnosed with ASD (Autism Spectrum Disorder) at 18 months old. In October 2012, Evan started 3 years of intensive therapy in our home. For 3 years, I have had therapists in our home to help me care for Evan.

In January of this year I realized that I had just a few short months of help with Evan left, and it frightened me. I would be solely responsible to care for Evan during the day. Unlike typical children, Evan has no concept of danger.

My worst fear is that Evan would get away from me and I wouldn’t be able to catch him before he was injured or worse. At nearly 300 pounds, there’s no way I could have chased him, let alone catch him and keep him safe.

When did you make that decision?

Well like most people, I thought I would start my journey on New Year’s Day. Isn’t that when everyone starts? The first of January came and went.

What steps did you take to reach these goals?

The very first thing I did is started setting goals. I grabbed a pen and paper and started with the big one: 115# in 2015. I set some daily, weekly, and monthly goals.

Next, I started tracking EVERYTHING that I put in my mouth and worked on being consistent. About a month into losing weight, I decided that I would try a gluten free diet to help with my joint pain.

I started limiting my sugar intake, and cut out breads and pasta. My joints quit hurting in less than 2 weeks after modifying my diet. I also decided that I would restrict processed foods and started eating cleaner.

From January to the end of May, I focused solely on what I was eating. I was losing steadily and my body felt so much better that I started to think exercise. I lived a very sedentary lifestyle. I walked some on the country roads where we live, but I wasn’t “loving it”.

When I was young, I loved bicycling. I decided to give it a try. It had been 25 years since I had been a bike. I wasn’t even sure I could still ride and at 240 pounds, I wasn’t sure I was physically capable. On June 3rd, I went to my friend Stacy’s house. She had an extra bike and I asked her if I could just take it out on the driveway to see if I could still ride.

Well long story short, that day she convinced me to take a short ride on the nearby trail. We rode 14 miles that day and I was hooked.

I found an exercise that I enjoyed.

My husband found me a used bike the end of June, and I began riding every chance I could get away. From June 3rd-November 2nd, I rode between 600-700 miles including one 50 mile ride.

What were some of the obstacles you faced along the way?

What advice would you give to someone else who is wanting to improve their health, lose weight, or become physically fit?

Weight loss is a very personal thing. You have to have the mindset that you are going to take the steps to personally improve your health and well being. No one can lose weight for you.

I have had a lot of people ask me how I lost 120# in just over 10 months. When I say by changing my diet and implementing exercise they seem disappointed.

It seems they are waiting for the name of “the magic pill”. There is no magic pill to long lasting weight loss and physical fitness. It is a personal decision to take control of your life and it is something that you need to consciously work at daily.

[bctt tweet= “There is no magic pill to long lasting weight loss and physical fitness.”]

You need to be willing to make changes and try something different. You put more limitations on yourself than anyone else. You will be amazed what you are capable of if you mentally jump over those boundaries you have set for yourself.

When I was asked by one woman I gave her this list: