Guatemala Trip, Part 2: Anything and Everything

If you missed Part 1, here it is. I’ll pick up where I left off, which was Saturday night. We spent Saturday night at Pastor David’s home. He lives right in Guatemala City, and we had a few rooms with bunks that we were split up into. Sunday morning we were up and out fairly early to head over to the church. There we were served breakfast, and then we had a tour around the church property. After this we enjoyed the church service. 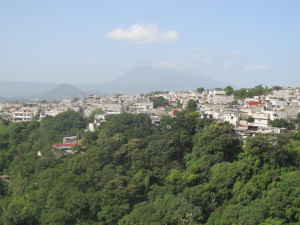 The view from CCCG

Church in Guatemala, at least at CCCG, is very different from the U.S. People were arriving and milling around by 8am at the church. Some were eating, some were in classes, some were just enjoying chatting with others. The church service started at 9:30am. We had about 1.5 hours of worship through music. It was powerful, moving, and passion-filled. Even though most of the songs were in Spanish, we could still sense God’s Spirit there with us. As we were singing, we had the view of the mountains and the sky out the windows we were facing. After the music, we were able to listen to the Pastor preaching. They had given us headsets so that we could listen to the English translation.

When I left the US, my Bible study group had just started a study called “Anything” by Jennie Allen. I had just begun to read the book before I left, so I really hadn’t gotten into it yet. But the concept is this: praying the prayer, “God, I will do anything”, and watching how God will work. The sermon at church that day had a similar theme, with a different twist. Basically I would title the sermon: “Everything.” Are you willing to give up everything to follow Christ? The pastor talked about the example of Abraham when God asked him to sacrifice Isaac. We all know that he didn’t actually have to sacrifice him, but the point is – Abraham was willing. He was obedient to what God was asking him to do. He had faith, and he trusted in the wisdom and sovereignty of God. Likewise, when Jesus speaks to the disciples in Luke 14, He says they must be willing to take up their cross, even “hate” their own family members, to follow Him. It sounds extreme, because it is. I don’t think that Jesus wants us to literally hate our families. However, there are times that following Jesus means losing relationships. It may mean that your family disowns you. So in that sense, you have to “hate” your family in comparison to your love for Christ. [Side note: I just read chapter 7 of “Anything” and she uses these exact 2 Scripture references]. 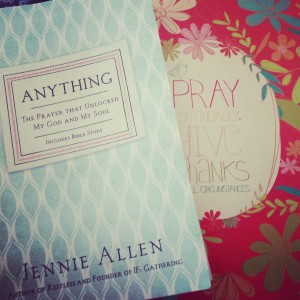 As I returned to the US, I got back into my Bible study book and watched the videos. It was like a complete parallel to the sermon I heard in Guatemala. As I sat listening to the sermon in Guatemala, I was thinking that I gave up very little to go on that trip. Yes, I sacrificed some time with family and some money and a few other things. But in the big scheme of things, I knew I’d be going home to my comfortable life and moving forward. In the book and videos from “Anything”, the question is: Will you do ANYTHING for Christ? Anything He asks of you? Are you willing to give up YOUR dreams? And in the sermon the message to me was, Am I willing to give up EVERYTHING that is important to me for Christ? Am I willing to sacrifice my own desires, wants, values, on the altar? Or am I clinging so closely to those things that God cannot use me in the way He wants?

This also causes me to reflect on various issues I’ve been hearing about lately within Christian circles. There’s so much talk about the gay marriage debate, competing values in the US, etc. And it makes me wonder – Are we more focused on OUR rights and OUR desires than we are on picking up our cross and following Christ? Are there times that we need to lay down our rights and just focus on following hard after Christ? To me, this means loving the unlovable, caring for the poor, reaching out to the lost, the broken, the hurting – and pointing them to Christ. Are we drawing people TO Christ or pushing them AWAY by insisting on being RIGHT? Make no mistake – I believe strongly in TRUTH. But I also believe that we as American Christians can get so caught up in Truth that we forget the LOVE part.

In Guatemala, what I saw from the Christians there was a passion for reaching their country for Christ. I saw them not just talking about it, but doing it. I saw them working right alongside our team, the “missionaries” from the U.S., and probably doing a much better job at it, since they know the language and the culture. 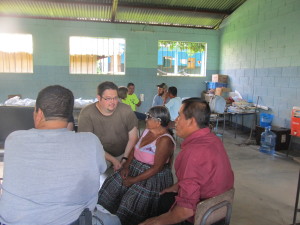 My point is this: you don’t have to go to a foreign country to follow Christ. But you do have to be willing to. You need to be willing to give up anything and everything to be a true follower of Jesus. But that starts right here in your own home, your own family, your own community. Can you give up one night a week of mindless television to serve someone else? Can you give up an afternoon to make a meal for the family down the street that just had a death in the family? Are you willing to give up Facebook for a time to pray instead? See, we often think of being a missionary as this BIG thing that means you have to sell everything and move to another country. And sometimes, that is what God asks. But much of the time, He’s asking you to give up the little things – to make small sacrifices – to reach others with His love. If we’re not willing to do these things, can we really call ourselves Christians? It’s not about works, but it is about seeking Him and what HIS will is in our lives. And I think many of us, including myself, have allowed ourselves to get comfortable instead of taking up our cross.

So this post is about Guatemala, kind of. Mostly it’s about what God is working on in my heart. I’m not there yet, but I hope I’m closer to where He wants me to be. I’m asking myself the hard questions right now. And I hope you’re willing to, as well.