Since returning from Guatemala on Friday night, thoughts have been swirling in my mind a mile a minute. It’s hard to put into words a trip like this. I’ve been on multiple short-term trips, but I still struggle with the question, “How was your trip?” when I return. Partly because it’s hard to know whether the person truly wants to know how my trip was (if so, get ready for a 3 hour discussion) or if they just want the brief one-sentence answer. And partly because it is really difficult to summarize a 9 day experience into a short, neat and tidy answer.

So I decided I better just write a blog post. I can share details here that might not come to me if I chat with you for 5 minutes. And if your eyes glaze over while reading this post, I won’t be offended (cause I won’t know).

A little background: This was my 5th trip to Guatemala. I’ve visited that country more than any other outside of the US. My first time there was in December of 2000 – my junior year in college. I spent an entire semester in Central America – primarily in Costa Rica, but we spent our final 2 weeks in Guatemala. I fell in love with the people and the country immediately. Then, in January of 2002, I helped to lead a missions trip to Guatemala during my senior year of college. After that, when Scott & I got married, we went on our honeymoon to Guatemala (June 2002). I returned again in 2011 with Community Church of the Open Door working alongside of Centro Cristiano Cultural de Guatemala. Finally, I went back in July 2015.

Despite the fact that I’ve been there 5 times, and have also visited several other developing nations in the region, I was still shocked by certain things that I saw. Guatemala is known as the land of contrasts. While driving down the highways you seen incredibly beautiful mountain scenery, contrasted by piles of trash alongside the road. You see people living in homes that are barely inhabitable, yet they are full of joy and have smiles on their faces. It is easy to ignore the fact that millions of people live this way when I’m in my comfortable home in the USA. But driving down the roads in Guatemala, it’s impossible to ignore. For me, the question that continued to come to my mind was, “What is it REALLY like to live here?” and “How do people survive?” It’s not easy. It’s not comfortable. It’s not fun to consider. 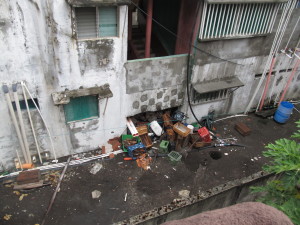 A hotel next to the retreat center. This is the alley behind the hotel. 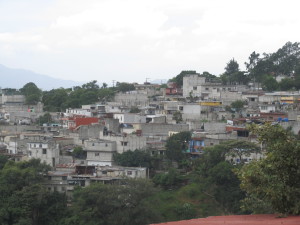 The outskirts of Guatemala City

So, the trip:
Travel Days – We left Hampden, Maine on Wednesday afternoon around 3pm. We stopped for dinner at Bertucci’s in Peabody, Mass, and then went to our hotel. We had to leave the hotel by 4am to be at the airport in time for our flight. When we arrived at Logan at the check-in counter, a staff member noticed us wearing our blue shirts and brought us to a separate line to check-in as a group. This was a big help, as we had to move some things around in bags so that we didn’t go over the weight limit. We had a layover in Miami and had time to eat lunch and make our final goodbye phone calls before leaving the country. We arrived in Guatemala City around 12:30pm Guatemala time, 2:30pm Eastern. When we went through customs, they sent us all out the exit and didn’t go through a single bag! This was a huge blessing and relief, as that can take a lot of time and we had a lot of donations with us.

Pastor David and some of the other CCCG members were there to pick us up. We headed to the church and they had a meal ready for us there. Because of the time difference, we ended up eating 2 lunches that day! We also learned that we would be heading straight to Monterrico that day instead of staying in Guatemala City as we had thought. So that meant another 3 hour drive in a van. It was past 7pm once we arrived in Monterrico, and we had been traveling about 17 hours by the time we settled into our bunks there. We had a late dinner and then it was off to bed. The first night in Monterrico, I did not sleep well at all, despite being overtired. Our room was stifling hot as the A/C was not working properly, and I was also getting eaten by misquotes.

In Country Days – Friday, July 10th, was our first full day in country. We started off with breakfast and then headed over to a local village called El Dormido. We arrived at the school and I could see the look of concern and uncertainty in our team’s eyes. No one really knew what to do. It was dirty. There was trash on the patio where we were supposed to set up. There were a few kids around, but they seemed stand-offish. Within a few minutes, though, a couple team members began playing soccer with a couple kids. Other team members began setting up the vision clinic, and I helped start the face painting with a few others. Soon everyone was settling in and finding their place. After the vision clinic was done, we headed by boat to an island across the cove. There we were able to meet the Pastor’s wife and visit some of the homes on the island to distribute dresses made by women at our church. This island community had a storm recently and many homes were destroyed. Once again I was left wondering what they do – how do they go on – after something like this happens. With so little possessions to begin with, how do you re-build? How do you restart? I don’t know. 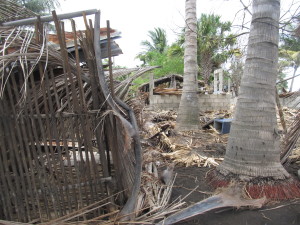 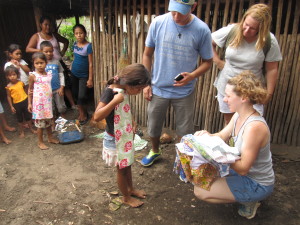 After visiting the island, we headed back to the retreat center where we were staying. We had lunch, and then we actually had some free time in the afternoon. This was helpful for us to recover from the long day of traveling before. Some people took naps, visited the beach which was just a short walk away, swam in the pool, or spent time in the hammocks on the 3rd floor of the center. My personal favorite was the beach, and I would have sat there all afternoon if I could have. The ocean is one of the best places to reflect, write, and pray, in my opinion. Plus this place has such powerful waves – it’s hard to sit and watch without recognizing the power of God. 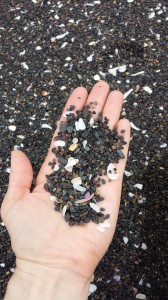 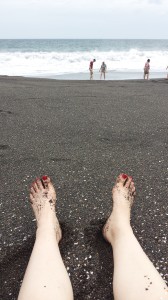 Saturday we got up and did a vision clinic and children’s activities right at the retreat center. There is a clinic connected with the center, so those of us doing the vision clinic went there, and the other team members stayed in the center and had some kids who came for the activities. I was able to help out with the glasses, and got to practice my very rusty Spanish helping people with getting reading glasses. I definitely was wishing I had practiced up before the trip!

After the clinic, we had lunch and then headed back to Guatemala City. We had to be back for church on Sunday so that’s why we were only in Monterrico 2 nights. We made it back to the city in time to have about 45 minutes in the market to do some shopping. I spent most of my time helping some of my team members shop – again with my very rusty Spanish! Plus, we were using dollars instead of Quetzals, which made bartering very difficult. However, most everyone was able to find a few beautiful things to bring home, which is always a good way to remember the trip.

I’ll sign off here for now. More to come about the remainder of the trip. But I’ll leave you pics of part of our drive back from Monterrico to the City – the part where I thought we might be driving onto a boat to our death. Turns out we were fine, just like that truck carrying sugar cane was fine: 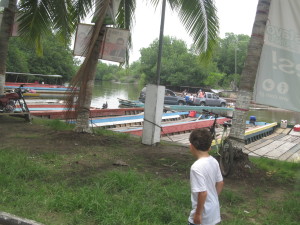 Approaching the “ferry” dock, where we were about to drive onto a flat wooden boat – AHHH 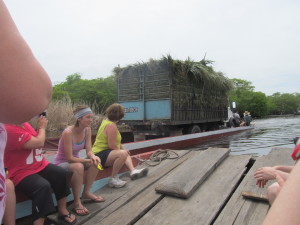