Episode 61: How to Stand Firm in the Face of Christian Criticism [Faith Series]

Have you ever experienced criticism from fellow Christians? How do you stand firm when you’re under fire from people you thought were supposed to support you? 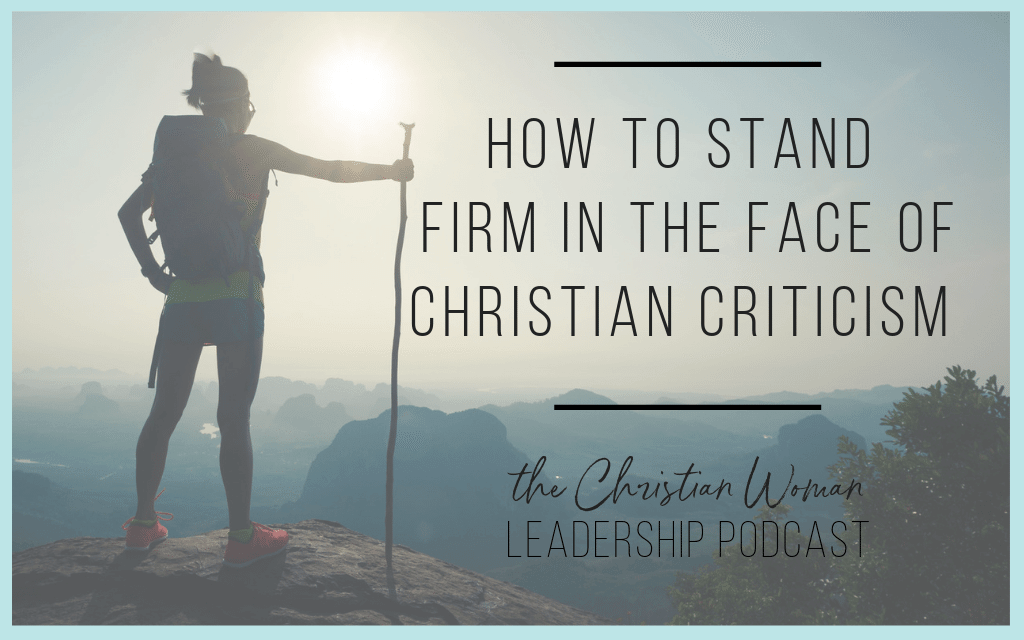 In the fourth episode of our Faith Series, we’re diving into the idea of standing firm in the face of criticism. Specifically, criticism from fellow Christians. Criticism is inevitable as a leader, so we hope to provide you with practical steps you can take when you come under fire.

Sometimes we as Christians can be the most critical people. And I have to confess that I am guilty of this. I can easily point out when I feel like something isn’t being done the “right” way, or when I think someone should change an approach, etc.

But in preparing for this episode, I was reminded of why I want to work on not having a critical spirit.

Criticism is a type of feedback, but it has an inherently negative connotation to it. The definition of criticism is: “the expression of disapproval of someone or something based on perceived faults or mistakes.”

If you are in leadership, you likely already know exactly what it’s like to receive criticism, and it never feels good.

We’re not saying that there is not a time and a place for confronting a brother or sister in Christ about a sin issue. We’ve discussed that on previous episodes, and I do believe there are times when criticism is warranted.

But in this conversation, we want to focus on how you can hold onto confidence when you experience criticism. First, though, let’s identify the types of criticism you could receive.

How to Stand Firm in the Face of Criticism:

Holly and I go through 6 things you can do to help you deal with the criticism you might receive as a leader.

1. Start with the truth

Identify what you know is true about God, about yourself (gifts, skills, calling), and about the world.

Start with knowing that you are loved by God, no matter what. You cannot be an effective leader if you do not believe this. And you will not be able to withstand criticism if your value is rooted in something outside of Him.

You cannot withstand criticism if your value is rooted in something outside of God.Click To Tweet

Make sure your confidence and trust is based on God (Psalm 20:7-8).  For more on this idea of leading with confidence, check out episode 6 of the podcast.

2. Evaluate the source of the criticism

The source of the criticism will help you to determine how to respond.

Okay, so now let’s get into what was actually said or done. What type of criticism was it? Because this may affect how you respond. Ask yourself whether there was truth in the criticism and  whether it was criticism about something you did or about who you are.

As we discussed on last week’s episode with Kadi Cole, sometimes we create our own sticky floors, and the way we perceive criticism is based on our own insecurity. As leaders, it’s important that we make sure we are not looking for things to be offended about.

4. Consider your motives and intentions

Next it’s important to look at where you are at currently. Have you been struggling, feeling discouraged or defeated? This could affect how you deal with criticism.

Also, if you can evaluate your intentions in the situation, you may find out that there was something you were expecting or anticipating… and maybe it was based in pride.

5. Consider that it might not be about you or the other person

It’s important to recognize that spiritual warfare is real, and that the criticism you are experiencing may be a spiritual attack.

If there’s one thing that gets us off track the fastest, it’s Christians fighting against each other. - Holly CainClick To Tweet

Okay so after you have done ALL of the above, now you can respond to the criticism. You may want to do one of two things: Don’t respond or respond.

Maybe this isn’t a battle you need to fight. Sometimes staying silent is the best option. We see examples of that in scripture, with Jesus as our number one example.

Sometimes we need to allow God to deal with the other person. We do not need to react, retaliate, or defend ourselves. This article discusses the value of remaining silent as leaders.

Another possibility is that you need to take a break to heal, reflect, or get help.

However, it’s possible you do need to respond to the criticism. If it’s from someone you are in an ongoing relationship with, and you want to maintain a healthy relationship, you may need to address the situation.

If you do respond to the criticism, it’s important to do so with gentleness and respect.

What not to do when you experience criticism:

As leaders, we will say hard things. We will go against the grain. We will speak up about topics that most people want to avoid.

“If you’re only saying things that everybody agrees with, you’re never actually saying anything of longstanding importance.” – Esther Littlefield

Just because we receive criticism does not mean we should STOP doing what we are doing. In fact, it’s probably a sign that we are on the right track.

Don’t allow the actions of people to tear you away from the church. It’s easy to allow being hurt by Christians in church as a reason to not continue being part of a church community. But in the long run, this will only hurt you, not help you.

Episode 6: The Importance of Leading with Confidence
Faith Series Episodes

Today’s show is brought to you by Audible. Audible is offering our listeners a free audiobook with a 30-day trial membership. Just go to estherlittlefield.com/audible and browse the unmatched selection of audio programs – download a title free and start listening.

How your free trial works:

Go to estherlittlefield.com/audible to start your free trial.