Episode 59: The Importance of Apologetics in Leadership & Dealing with Doubt with Hillary Morgan Ferrer [Faith Series]

What is apologetics? Why is it important? And what in the world does apologetics have to do with leadership? 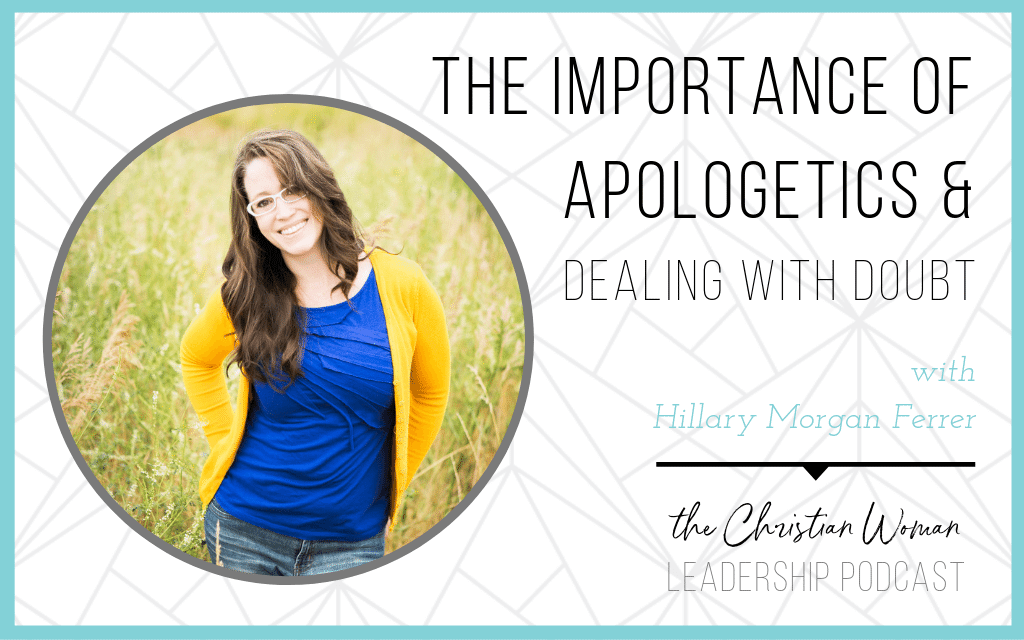 In the second episode of our Faith Series, I talk with Hillary Morgan Ferrer about her journey into apologetics, why it’s important to know your faith, and how to answer questions with respect and kindness.

We also dive into the issue of doubt and how your personality plays a role in your faith. Hillary also shares about the difference between experiencing God and knowing intellectual truth about Him as well as how apologetics can keep you in the faith.

Hillary is from Texas and now lives in Pella, Iowa, a town of about 10,000 people.  She’s been married for 12 years. Her career has included 10 years as a professional photographer, six years as a high school biology and chemistry teacher, and now she runs and leads Mama Bear Apologetics full-time.

Leadership for Hillary has been a more recent phenomenon. God has built her character with hard times over the years. Her leadership journey has felt like the movie “The Karate Kid”– often she didn’t understand why she was doing what she was doing, but now it’s become clear.

Anyone who aspires to leadership doesn’t really understand leadership.Click To Tweet

Had she done her apologetics work earlier, Hillary says she wouldn’t have been ready. God took her through humbling experiences that helped prepare her for her current role.

Apologetics is not about apologizing. It comes from the Greek word “apologia,” which means to give a defense for. It was used by lawyers to present reasons and evidence for why certain conclusions were true. Apologetics can be used in different areas: sports teams, bands, etc.

Apologetics simply means giving reasons why we believe in objective truth. It’s important to remember that as Christians, we’re dealing with facts.

Apologetics is ultimately about understanding the barriers that prevent a person from being able to accept the truth of Christianity and trying to remove those barriers. – Hillary Morgan Ferrer

Why Hillary Started an Apologetics Podcast

Mama Bear Apologetics Podcast started as a ministry idea. She found that women, especially moms, weren’t exposed to apologetics. She had a week of sleepless nights as the words “mama bear” just came to her. She outlined what she would do and how she would lead this ministry.

At an apologetics conference, she told fellow presents about her idea and they affirmed her in it and encouraged her to start immediately. Hillary felt like a podcast was the way to go because moms can follow a conversation no matter what they’re doing.

She also published a book, “Mama Bear Apologetics” through a connection with a friend’s publisher.

Why It’s Important for Christian Leaders to Understand Apologetics

People have a tendency to minister to others in the same way they were ministered to, so there’s a whole demographic of people we’re missing out on because apologetics isn’t prevalent.

Apologetics isn’t necessarily how I came to faith. It’s how I kept myself from leaving the faith.Click To Tweet

Apologetics is important for loving people. Asking and answering questions may help people remain in the faith.  Asking questions isn’t a form of rebellion because people come to faith in different ways.

Hillary notes that there are 3 basic personality types, and that these different types of people need different levels of evidence:

It’s important to make sure you recognize where the person’s doubts or questions are coming from. If not, you may not be answering the right concerns.

Until you get through those objective questions, you won’t even reach the hurt heart that’s really at the core of it.Click To Tweet

There are personal, psychological, and cultural barriers to coming to faith in Christ. As leaders, we need to recognize and be aware of the cultural beliefs that are preventing that faith in the first place. We can scatter seeds, but the soil may have rocks and gravel added by culture. Therefore, we should be aware of the rocks so that we can attempt to remove them.

Unfortunately, many people are leaving the church because they aren’t getting their questions answered. 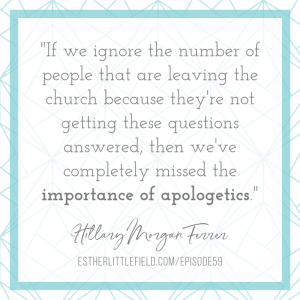 How Apologetics Kept Hillary in the Faith

Hillary remembers sitting in church as a 12-year-old as her pastor taught a series on “Liar, Lord, Lunatic.” Her mind was blown because she realized she could have reasons for her faith.

Her mom had cancer. Hillary’s sister recently died of cancer. She’s had cancer, and can’t have children. There are lots of ways her life has been hard, but her faith isn’t based on how she feels or whether God is being fair.

Experiences versus Intellectual Truths in the Western Church

Only recently (past 100 years or so) has coming to faith from emotional experience been more common. Once your experience is over, your love for God must be based on how well you know Him.

Do I really know Him? Or have I just loved the experience that’s been created around Him?Click To Tweet

If our relationship with God is based solely on experience, people will either walk away from the faith or chase the next experience. People who base their faith on experience tend to believe whatever people are saying who created that experience.

A lack of understanding about your faith leaves you wide open to the enemy. You’ll believe anything that gives you that mountaintop experience.

Plenty of people are bowing down to a Jesus of their own design.Click To Tweet

Also, we’re believing a lot of un-truth about Jesus. So if you believe that Jesus always wants you to be healthy and wealthy and that doesn’t happen, you think God is a liar. But we know that suffering is a part of the Christian faith.

We fall prey to many lies when we don’t know the truth that’s based on solid theology. When we don’t ground our faith in robust intellectual tradition, we won’t spot counterfeits. This is why we need discernment.

The Truth about Discernment

Some see discernment as pointing out everything that’s wrong, but does this make you the sweet aroma of Christ or give you the stench of self-righteousness?

Discernment is acknowledging both the good and the bad.

The enemy has people in captivity with bad theology. It’s important that we target the idea and not the captive. To build a bridge, affirm the good intention they were going for before you point out the lie.

Hillary’s “Diagnosing Doubt” talk at the Women in Apologetics Conference goes through misconceptions of doubt.

Many people believe doubt is a sin. But Hillary shares that if we go to Genesis and read the story of Adam and Eve, we understand that they had questions and doubts before sin entered the world. Sin entered the world when they disobeyed and acted on their doubt.

As leaders, we should not dismiss doubt or assume that someone has unconfessed sin. Instead, we can create a safe place for people to share their doubts. From there, we may be able to help them or provide tools for them to overcome this doubt.

Even just being able to express doubt helps alleviate that doubt.Click To Tweet

How We Can Respond When People Have Questions

We swing between being a terrifying truth-teller or a compassionate compromiser.

A terrifying truth-teller says, “I’m just going to lob this truth bomb and let the pieces fall where they may.” A compassionate compromiser is scared to disagree so they stay silent or compromise.

Ask people to clarify their positions, not in a passive-aggressive way, but in a way that helps them (and you) understand where they’re coming from. We can’t assume we know someone’s worldview from one comment.

Conversations and relationships are key when it comes to dealing with doubt and questions or responding to various worldviews.

How to Get Started in Apologetics

Hillary is becoming more aware that our culture’s pendulum is swinging really far into crazy and she doesn’t see it slowing down.

As Christian leaders, we must recognize that we live in a time that’s different. We live in exile. We can’t join our culture because the hallmark of this culture is irrationality.

It’s important for us as leaders to change how we are living and interacting with culture. Hillary reminds us that we cannot go about business as usual.

Hillary can’t get enough of these resources:

Hillary Morgan Ferrer is the founder and Mama-Bear-in-Chief of Mama Bear Apologetics, She feels a burden for providing accessible apologetics resources for busy moms. Hillary is the coauthor and general editor editor for the book Mama Bear Apologetics: Empowering Your Kids to Challenge Cultural Lies, available at Amazon, Target, and Barnes and Noble.

She has her masters degree in biology from Clemson University and her specialties are in scientific apologetics, critiques of the Darwinian mechanism, dealing with doubt, along with identifying causes and solutions for youth leaving the church. She and her husband have been married for 12 years and minister together as an apologetics team in the local church. She can never sneak up on anybody because of her chronic hiccups, which you can hear occasionally on her podcast.

This episode is brought to you by Audible. Audible is offering you a free audiobook with a 30-day trial membership. If you decide to use our link to get a trial membership, it helps to support this podcast. We really appreciate the support as it helps cover our costs. In our episode today, Hillary mentions several books and many of them are available on Audible. Just go to estherlittlefield.com/audible and pick out your title today. If you decide it’s not for you, you can cancel anytime, and you still keep the titles you have already downloaded! 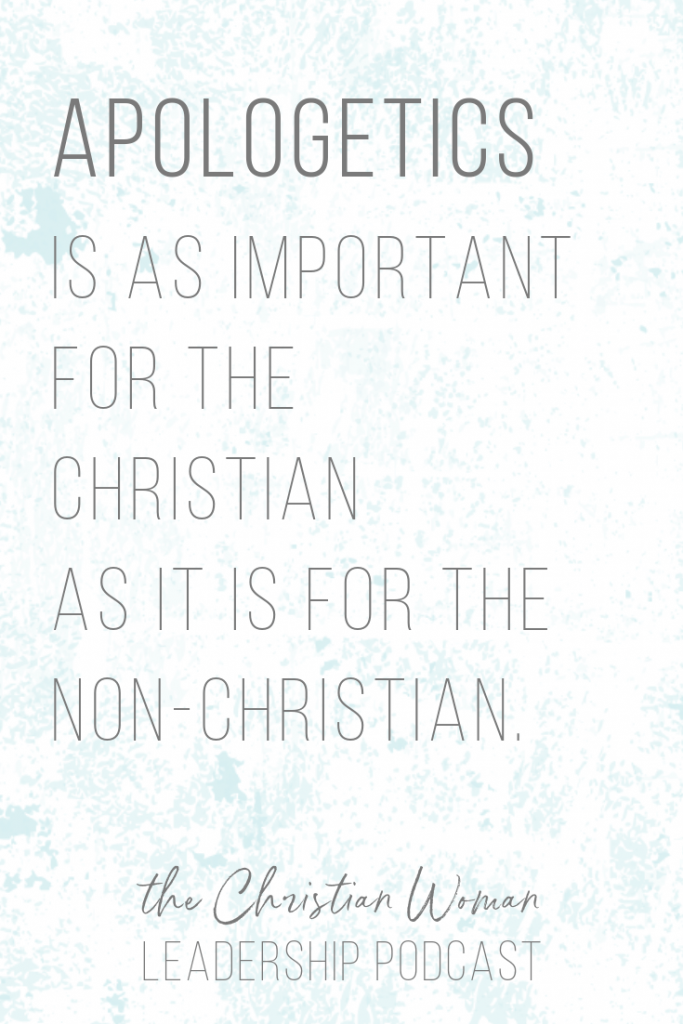