Episode 51: Trusting God through Transitions and Building Confidence in Your Calling with Patrice Washington [Wellness Series] 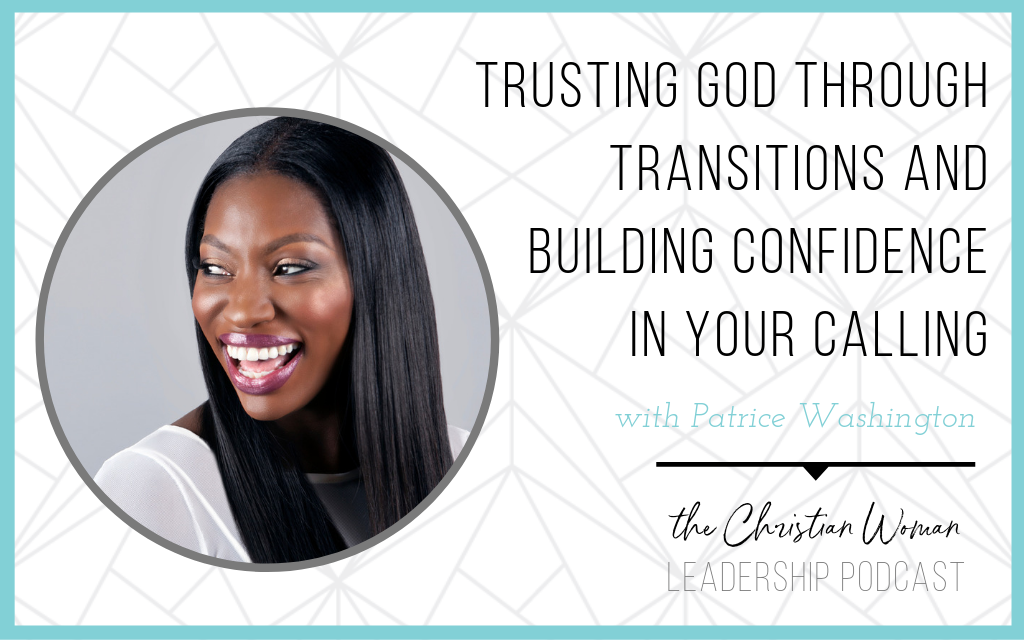 Podcast guest, author, speaker, coach, and media personality Patrice Washington shares her insights into leadership, how to trust God through transition, and how to build confidence in your calling. If you’re struggling with trust, change, and what to do next, Patrice shares insight after insight in this episode.

Patrice is America’s Money Maven, but she didn’t start out with that title. She launched her business as a real estate and mortgage broker at the age of 21, but when the recession hit, she lost everything. God led her to Proverbs 17:16 and from there she launched a blog, pursued wisdom, and looked for books to help her define who she was.

She was greatly impacted by Talane Miedaner’s book Coach Yourself to Success, which encourages the reader to look back in time to help her discover her purpose. Patrice realized that she had been a leader since she pursued a Student Council position in third grade, a time when she didn’t feel confident. She knew from a young age that she could help if just given the chance.

When she ran her first business, Patrice understood that she was a boss because she had employees, but she’s since realized she’s a leader in her business within the past few years.

“It’s one thing to boss people around. It’s another thing to enroll people in a vision.”Click To Tweet

She realized that if people trusted her, she couldn’t be haphazard and must lead with intention. Patrice reminds us that it’s time for Spirit-led, faith-filled people to step up and lead. Christians are sprinkled everywhere to lead people everywhere, but we get timid about sharing our faith.

“People are following you whether you want them to or not.”Click To Tweet

How Faith has Played a Role in Her Leadership

Faith has always been a part of who she is. She tells event planners and media schedulers who ask her to speak that spirituality is a part of her; it’s a pillar in her life. She must talk about it.

She feels that her job is to plant seeds and to tell the truth about her story.

“Learning how to share your faith without condemning other people is what truly allows people to get the message.”Click To Tweet

We don’t lead people by beating people up, convincing them, or convicting them. We lead by example.

Leadership, according to Patrice, is being the example of the path. Being a leader means that you are clear, authentic, Spirit-led, and can articulate the vision.

Give yourself permission to be awesome, to be all God made you to be, and still be a hot mess.

Since 2009, Patrice has called herself the Money Maven until other people believed that about her. She’s appeared on Fox News, The Dr. Oz Show, and Steve Harvey.  She realized that in order to rebuild wealth, you can’t just focus on budgets and savings.

In 2017, the Holy Spirit said that she must tell the whole truth. Sometimes the Holy Spirit calls us to pivot or transition, and we may wonder why He wants to interrupt our current success. God called Patrice to transition her business from focusing on money to focusing on the idea of “redefining wealth”.

Redefining your wealth is so much more than just money and material possessions. The true definition of wealth (from the Bible) is well-being.

Patrice shares some examples of how God has taught her lessons in the various pillars of Redefining Wealth. She has seen how valuable relationships are, for example, and has learned the value of simply treating people well.

“It’s not my job to try to force or manipulate or make things happen. Just treat people well.”Click To Tweet

The Holy Spirit drove her message. He asked her to get out of her comfort zone, but getting out of the box is frightening.

But Patrice obeyed and looked at her life and the patterns and practices that had helped her achieve success. She wrote out 200 ideas that later became podcast episodes. Then she moved those ideas into categories.

She saved the money and faith pillars toward the end intentionally because she wants her audience to do the work and not just wait on God without taking responsibility for their lives.

What Happens When You Need to Pivot

Patrice had a previous business, Real Money Answers, when the Holy Spirit prompted her to start her current business, Redefining Wealth. She used her existing platform to pivot.

As she transitioned from Real Money Answers to Redefining Wealth, she took down all her old products so she had no income. She used her savings to finance her new venture.

During her launch time, lots of previous venues turned her down. She had a strong conviction and stuck with it. Her time of transition and pivoting forced her to re-evaluate who she was as a businesswoman and to become independent of what other people think. Patrice reminds us to not give up just because other people don’t understand.

Our job is to relentlessly communicate the message we’ve been given.

“You can quit a job. You can’t quit a calling.”Click To Tweet

Building Confidence in Your Calling

A lot of us struggle to build confidence or discover our gifts and calling because we’re in comparison mode.

Negative words or experiences about our natural giftings come easily. For example, Patrice’s gift is speaking, but she got in trouble in school for talking too much. It only makes sense that your gifts will be attacked by your enemy who is trying to steal your gift.

How to Develop Confidence

Before Patrice speaks, she still gets nervous and feels like a wreck. One trick she has learned is to make a joke early on. The smiles put her at ease. She’s always looking for ways to break the ice.

Therapy has also helped her. She grew up believing she was ugly because people told her she was, but that’s not a story she has to own.

Patrice notes that a big part of building confidence is simply in the doing–you have to practice using whatever gifts you’ve been given.

Confidence, for Patrice, comes from knowing she’s genuine. She knows that this is the story God gave her and her responsibility is to share it. Her story is not about her.

Tools Patrice Used to Help Her Understand Her Wiring

Patrice is a self-proclaimed “assessment junkie.” She loves Gretchen Rubin’s “Four Tendencies.” She’s a questioner, and knowing this about her made so many things make sense. It gave a name to her way of being.

Episode 31: The Key to Accomplishing Your Goals

Patrice got her start as your favorite personal finance expert, “America’s Money Maven,” having tremendous success with her “mindset approach” to personal finance. She has since expanded her brand and mission, encouraging women to chase purpose, not money.

Patrice is committed to redefining the term “wealth,” using its original meaning, “well-being.”  She encourages women to have “wealth” in all aspects of their lives by pursuing their purpose, being fulfilled, and earning more without ever chasing money. Through her teachings, Patrice empowers women to look at life through the lens of abundance and opportunity, instead of lack and scarcity.

As the founder of Redefining Wealth and The Earn More Money Movement for Women, Patrice has built a thriving community of high-achieving women committed to creating a powerful life vision–in their careers, home, health, and personal finances.

The Confident Leader Club is a resource designed for Christian women who want to receive additional community, growth, and action. Each month, members of the club receive a practical training developed by me (or other amazing women) that will help you grow in your faith, leadership, or relationships. We also have a monthly Take Action call where you can focus on one project or goal during the time allotted. Plus, we also have a book club and other fun things going on! Join us here or get on the waitlist. 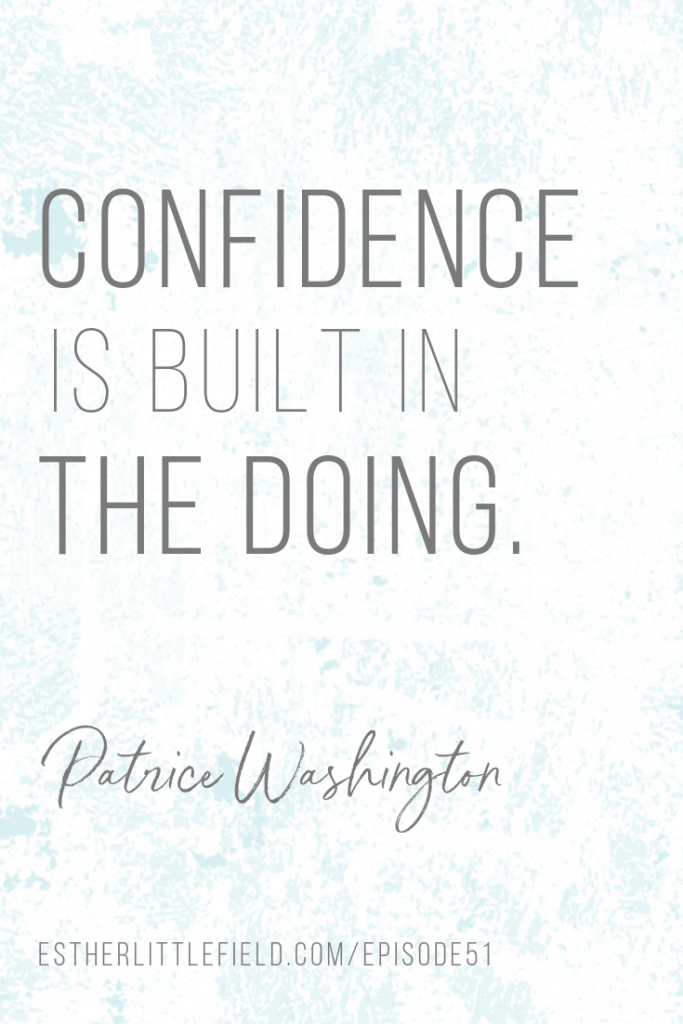