Doubt Your Doubts and Believe Your Beliefs

Almost 4 years ago, I had this idea to start a Bible study at my church. I wanted to reach out to younger women, and women who had never been in a Bible study before.

I wasn’t sure if this idea was MY idea or God’s idea.

Was I being prideful to think that I could lead a group? Was I qualified or cut out to do this, since I was “just a mom”? Besides, I wasn’t that consistent with my own personal Bible study time.

I jumped in and started the study anyway. Basically, this was my line of thought:

I am terrified. This could fail. This may not even be from God. And I am going to do it anyway.

It turned out to be one of the best decisions of my life. Those of us who gathered to study God’s word started to experience powerful life changes. I am still in awe every time I consider how God has moved within this group of women.

3 years later, I drove to Bible study again, just like I had for the previous 3 years.

Yet this time, it was different: I was nervous.

I didn’t know what to expect. I was unsure of myself and how I even ended up here.

The group had grown from the original 5 or 6 members to nearly 30 women planning to attend that night. I began to hear these thoughts swirl around in my head:

Who are you to be leading this thing? What makes you think you’ve got this thing figured out? What if they knew the REAL you?

There it was: DOUBT.

Where it all began…

Back in the garden, when Adam and Eve were hanging out in the perfect surroundings God had given them, Satan decided to pay them a visit. I’m not sure why he chose to approach Eve first, but he did.

Satan did not immediately come out and try to get her to sin. Instead, he began by planting a seed of doubt in her mind.

He started off with saying, “Did God actually say ‘You shall not eat of any tree in the garden?” (Genesis 3:1, ESV, emphasis mine). Note, God had not told them this – He had only forbid eating from ONE tree.

Satan’s first method of tempting people into sin was DOUBT.

He wanted Eve to doubt that what God said was actually true. Eve (and Adam) chose to believe the doubt instead of God. And we all know where that landed them – outside of the garden, with death having entered the world.

Satan did this to another woman in Scripture, but this time there was a much different outcome.

An angel showed up to Mary, a young Jewish girl who was quite shocked at the news she received. She was to become the mother of the Savior of the world, but she was a virgin.

Granted, this doubt was entirely legitimate. It made sense for her to wonder how on earth she was to give birth to the Messiah, let alone be pregnant in the first place!

But here’s where Mary’s response differed from Eve’s:

She decided to obey what He was asking of her, even though it seemed entirely ridiculous and impossible.

She said yes to the craziest idea in history: giving birth to the son of God. It doesn’t make sense. It wasn’t wise. It wasn’t culturally acceptable.

But she said yes. She believed God, and obeyed. It was the YES that changed the world.

Angie Smith spoke recently during the IF: Gathering 2016 event. She was questioning whether she deserved to be on stage with all these other amazing women and speakers. She said, “Maybe I was just a cheerleader and I didn’t really have that much to offer.”

There it is again: DOUBT.

A woman who has written a bible study, several books, and spoken on countless occasions, still wondered whether she had anything of value to offer.

It feels crazy. It feels nuts that I could make a difference. I’m just a normal person who messes up every day.

Hearing Angie say those words changed something for me. It made me realize that no matter how big of a platform someone has, or respected they are, they are not immune to doubt.

Angie went on to tell such a powerful story and share Biblical truth that impacted thousands of women that day. Hundreds of women posted on Facebook & Twitter about the impact her talk made on them.

What if she had given in to the doubt?

What if she had allowed that to hold her back from stepping onto the stage?

God still works, even if we give into the doubt:

We all doubt and overanalyze, and to some degree, God moves anyway. He moves on with his plans on this earth with or without us. – Jennie Allen, Restless

The good news is, God WILL accomplish His sovereign plan. The question is: Do I want to be a part of that or will I miss out?

I second guess myself all the time, but especially when I’m sensing that God is asking me to do something uncomfortable. I wonder:

Can God really use me? Am I actually doing what I’m supposed to be? Am I following what He wants?

Why do we get bombarded by doubts whenever we are ready to step out into something new or big or different?

Because there is a war. And I wish I were being dramatic. But it’s real, and you know it because you feel it too. It’s a resistance that comes anytime you consider doing something potentially important, and suddenly all you want to do is grab a bowl of peanut M&M’s and get lost in your third viewing of Downton Abbey.
– Jennie Allen, Restless

Our enemy wants to stop us from experiencing the full life God has for us. So he brings us to doubt.

SO WHAT DO I DO WHEN I ENCOUNTER THESE DOUBTS?

I believe there’s a couple ways of responding to doubts. One of my favorite bands has a song that says: “Doubt your doubts, and believe your beliefs.” 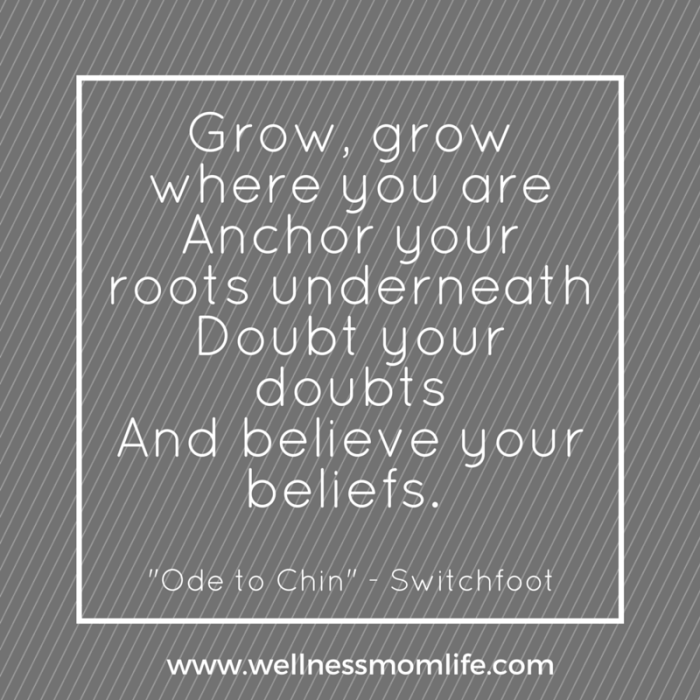 What does “doubt your doubts”mean? It means questioning where your doubts are coming from. Ask yourself, “Is this coming from God or somewhere/someone else?”

[bctt tweet= “Most of the time, our doubts are coming from a place of fear, insecurity, or misinformation.”]

When you take a moment to identify the doubt, and ask where it is coming from, you will be better able to recognize whether it is valid or not.

Note: Some doubts are reasonable! For example, it was entirely reasonable for Mary to doubt that she could be pregnant. It’s realistic for me to doubt that I can walk across a tight-rope over Niagra Falls.

Start by determining the motivation or source of the doubt, then go to step 2.

When faced with doubts, you must cling to what you KNOW. Go back to the truth.

For me, that means turning to God’s word and prayer. When I hold onto the truth about WHO God is, and what He says about me, then it’s much harder for the doubts to win.

If what I’m sensing that God is leading me towards is not in direct opposition to something in His word, then I must listen for the Holy Spirit’s guidance.

If I have a doubt that seems to be based on reality (i.e. God leading me to do something that seems impossible), then I have to cling to what I know about God. I have to hold on to what He tells me about His strength, instead of relying on my own ability to accomplish the task.

So friend, I ask you, what if God could actually use YOU?

What if God could use a MOM to change the world, or even just make a difference in one person’s life?

What if believing God and doubting your doubts could lead to incredible or even “impossible” outcomes?

All we have to do is say YES.

Doubt your doubts, and believe your beliefs.

Comment below and let me know if you struggle with doubt as a mom!