How to Change Someone’s Life

Going back to school after my dad’s death was not the easiest thing to do. But they say that one of the best ways to deal with grief is to continue with as much “normal life” as possible.

It was my 8th grade year, and I was near the top of the class. I always thrived on doing well in school, and got completely stressed if I got a ‘B’.

But going back to school 2 weeks after your dad dies changes things.

It makes it hard to focus. You have lots of people telling you they know how you feel, and many other attempts at making you feel better. None of which I fault anyone for – I mean how many 13 and 14 year olds know how to deal with grief? Most adults don’t even handle it well. 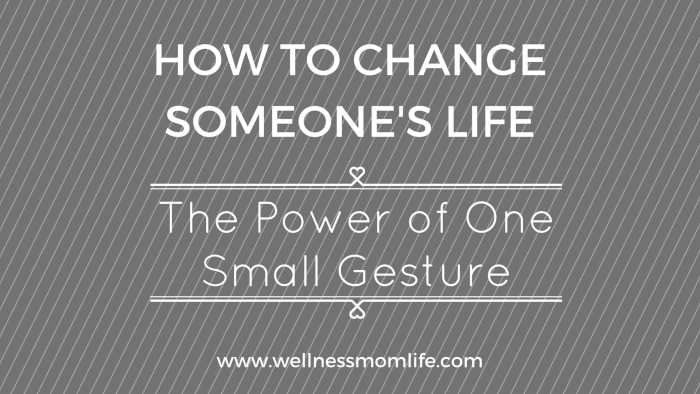 Shortly after I returned to school that Spring, we had a test. I don’t remember what subject – I want to say science. What I do remember is getting the test handed back to us in class.

I looked at my page, and saw a number. A number I’d never seen before. It was a 67 – a failing grade! Now, in the big scheme of life, that failing grade really didn’t matter. It wouldn’t affect my future. It would not change where I went to college or the scholarships I received.

But at that moment, in my heart and brain, the “F” mattered.

I began to cry. I couldn’t believe that I had failed a test. The logical line of thinking – that I had missed 2 weeks of school and just been through the most traumatic event of my life – was not there. All I could think of is how awful it was that I failed that test.

Moments later, my teacher, Mr. Prest, came over and took the test from me. I am sure there was a verbal exchange, but sometimes it’s tough to remember those details from over 20 years ago. But here’s what I remember: he took the test, and he ripped it up.

That test – that moment – did change my life.

Not by affecting my GPA or my college choices, but by showing me that people are more important than numbers or policies or procedures.

Mr. Prest did something that showed me his care and concern for me in that moment. He was one of the toughest teachers out there. He was not one to normally rip up tests! But at that time, he clearly could see that I needed that.

I needed to know that someone cared about me and didn’t care about the number on the paper.

Sometimes the smallest gesture makes the biggest impact on someone. Sometimes a simple, “How are you really doing?” means more to someone than you can imagine. Sometimes offering to pay for someone’s coffee, or telling them you’ll pray for them (and actually doing it), or giving them a hug, can change their day, their week, maybe even their life.

We may never know the impact our words and gestures have on others.

I am sure Mr. Prest is not aware of how impactful it was for me when he ripped up that test. But he did it anyway.

We can’t base doing or not doing something on whether we’re going to get recognition or honor for it. We do it because it’s the right thing – we get that twinge that tells us, “Go speak to that person,” and we do it. Or not.

When we do, we just may be changing that person’s life.

How to Receive Feedback as a Leader (and Why it Matters) [Ep. 168]21 Total Shares
Setting Goals & Making Plans that Bring Peace Instead of Stress with Christa Hutchins [Ep. 181]20 Total Shares
How to Find Life Balance, Discerning What’s Most Important, and Why Outsourcing May Be Necessary with Christy Wright [Ep. 171]18 Total Shares
Leadership, Healthy Relationships, Christians & The Enneagram – Best of Year 1: Beth McCord [Ep. 159]18 Total Shares
Why You Don’t Have to Strive or Step Back in Your Leadership with Erica Wiggenhorn [Ep. 175]17 Total Shares
4 Steps to Goal Setting & Creating Your Annual Plan for Your Business [CWBP Ep. 61]13 Total Shares
5 Steps to Managing Your Emotions as a Leader with Jessica Hottle [Ep. 180]12 Total Shares